Remix of a blogpost by Maisa Imamović and debris of notes, pictures and audio, complemented with a dispersed editors' note.

What promises does modular, non-linear publishing hold for writing and reading, research and collaboration? What potentialities of collectivity, collaboration, and commons can hybrid publishing processes set free? How would that challenge existing roles and practices? Modularity in form and process, after proving itself in software development, has conquered the world at large. It fits the dynamics of the market and allows us to communicate in bits and pieces, fierce, hyped-up, and snappy. Efficient medium, efficient messages.

But modularity and non-linearity also contain a notion of critique. They can challenge myths of origin and originality, authoritarian authorship, single-voiced narratives, hero perspectives, and definitive truths. They can inspire a Carrier Bag Theory of Non-Fiction: publications holding grains of knowledge and experience of various kinds and species, which can be laid out in different ways and directions. How would these forge meaningful connections and complex relations between contents, people, places, and futures?

The Carrier Bag Theory of Non-Fiction

Janneke Adema is a Research Fellow at the Centre for Postdigital Cultures at Coventry University. In her research, she explores the future of scholarly communications and experimental forms of knowledge production, where her work incorporates processual and performative publishing, radical open access, scholarly poethics, media studies, book history, cultural studies, and critical theory. Gary Hall is Professor of Media in the Faculty of Arts & Humanities at Coventry University, UK, where he directs the Centre for Postdigital Cultures and its research studio The Post Office, which brings together media theorists, practitioners, activists, and artists. 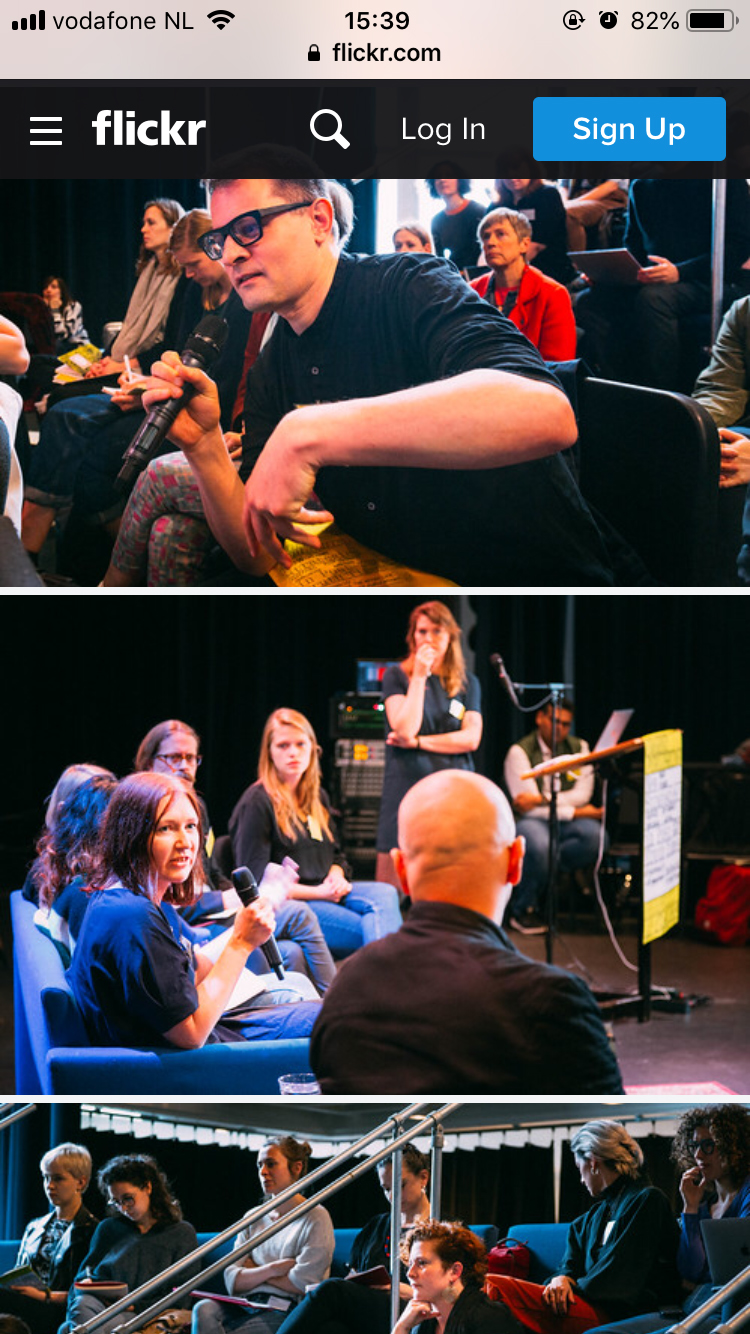 Janneke Adema and Gary Hall investigate modular publishing from a post-humanities perspective. They criticize what publishing does rather than what it is. According to them, culture which is remixed and made modular in digital environments creates new forms of communication. 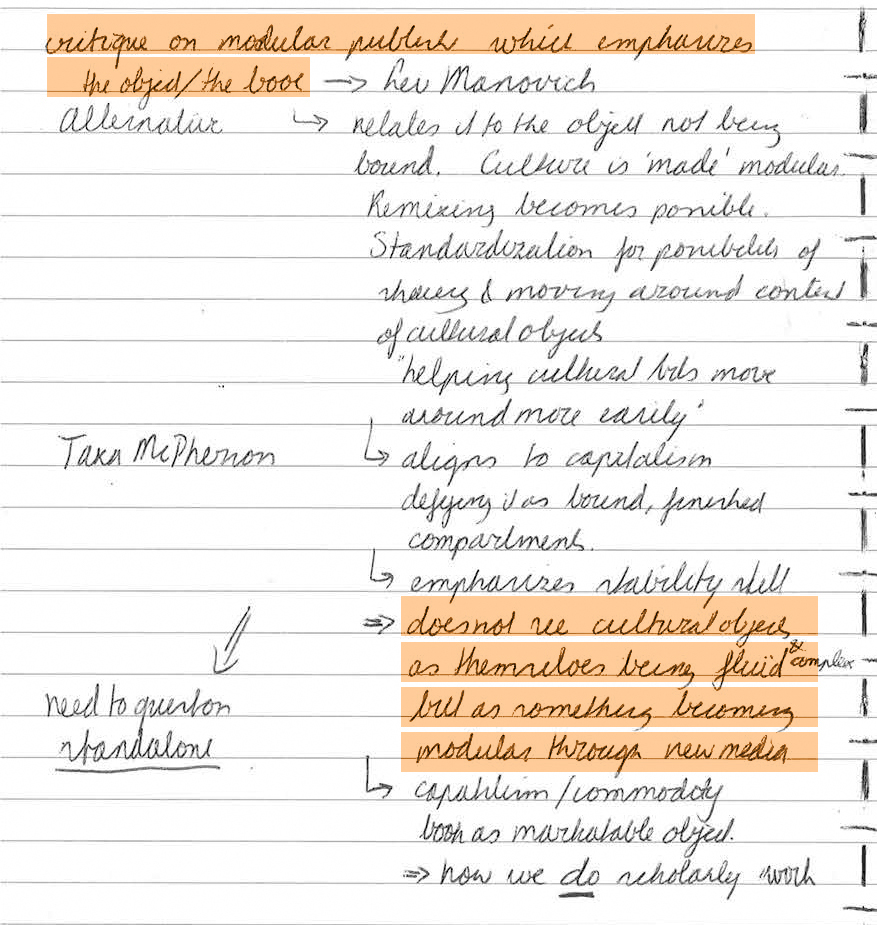 What’s important to remember is that not all analogue objects can be translated to digital forms. Doing so mirrors lack of appreciation for books, for example. It’s like putting trees, minerals, and shops in one-and that’s all. It’s a commodity.

A lack of appreciation of fluidity.

They argue that in order to re-invent performing a book, one needs to embrace everything what is given with the book, and focus on these questions. Where should we cut them? Who is making decisions? Who moderates the decisions? What’s kept/ what’s preserved in the process?

What boundaries do we take responsibility for?

Dispersed editors' note: "It is a strange realism, but it is a strange reality." This is a quote from "The Carrier Bag Theory of Fiction", by science fiction author Ursula Le Guin. Her concept refers back to something called the carrier bag theory of human evolution. Human evolution, according to this theory, has much more to thank to the carrier bag - the container in which you can put apples, berries, pretty little stones (in Le Guin’s words: "A leaf a gourd a shell a net a bag a sling a sack a bottle a pot a box a container. A holder. A recipient") and to the people gathering and carrying all these things, than to mammoth-slayers and their spears, who’ve always gotten all the attention. Transposed to writing, this focus on the gatherers rather than the hunters calls for different kinds of story and storytelling. Carrier bag works do not focus on the hero and on time unfolding in a linear and progressive fashion, ending in a grande finale, whether it’s triumph or apocalypse. Rather, they focus on multiple relationships and voices, on process. How could such carrier bags look like beyond the science fiction genre, e.g. in research publishing? That calls for experimentations, tools, concepts, and collaborations. New imaginations of publications, incorporating different voices and delivering different reading experiences. An urgency in publishing will need to address the form and make-up of the contents as well, and start up discussions on the post-digital, on post-humanities, and on the undercommons as new modes of knowledge sharing.

Lídia Pereira’s graduation project, touching upon the topic of labour on social platforms which later becomes a product designed by social experiences, questions why we are not organizing. According to her, it’s because we don’t consider it work. Her project is an attempt to create a medium where there is discourse, instead of a definite conclusion(s). Perhaps even a platform for changing minds? That’s how she came up with a zine, as a research medium for her research to continue growing.

Arriving at conclusions, or maybe not.

During the discussion the following questions were raised: Why do old formats persist? Who has the privilege to own the new platforms? What is the future of archive? 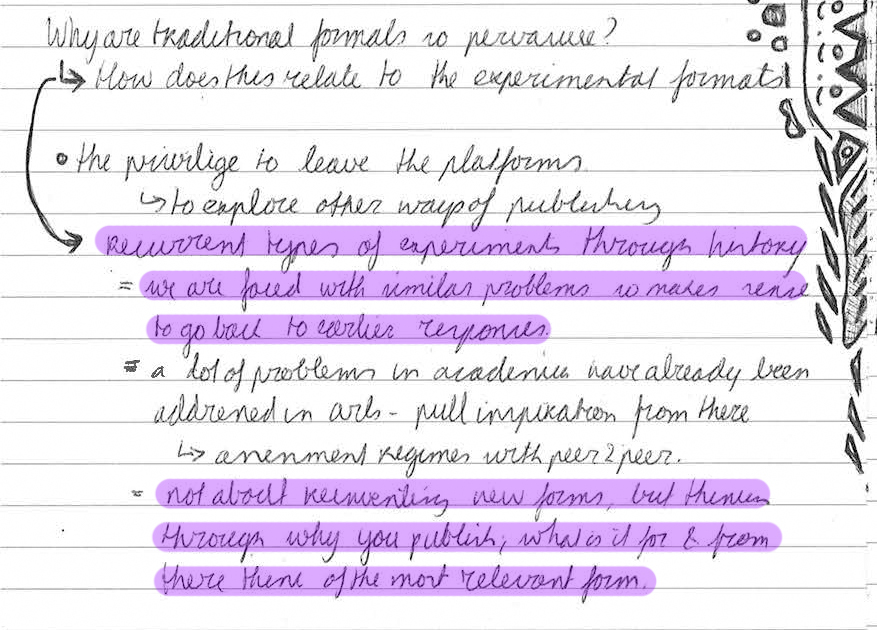 Post-digital Publishing and the Return of Locality

Axel Andersson investigates the role of locality for contemporary Publishing. 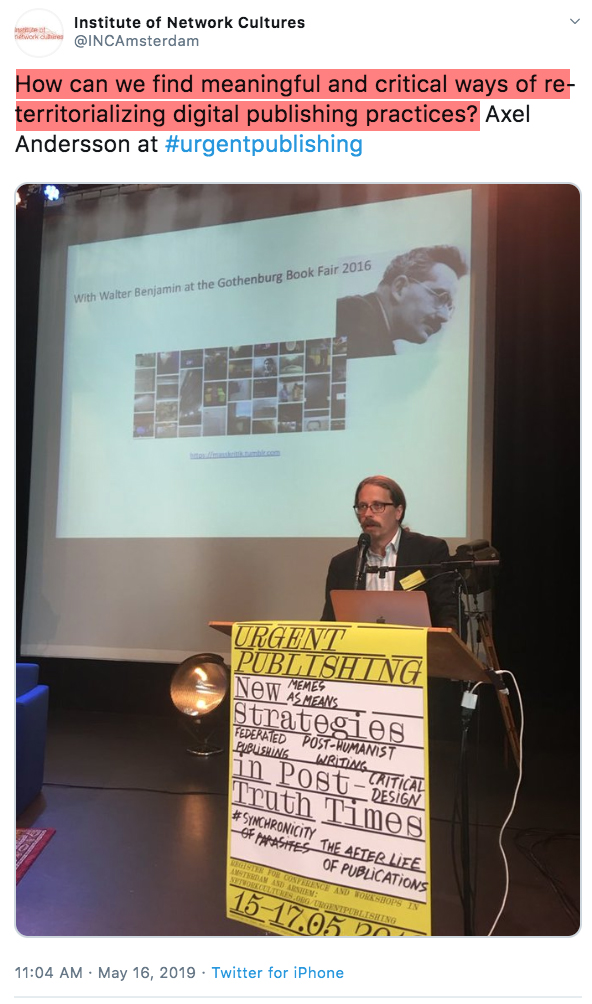 Then Axel, oh Axel Andersson, who was asked not to give an academic ted talk, did not mind sharing a B&W image of him, in which he is thinking about Smithson; a fact which opened up his presentation of thoughts on topics of locality and post-digital publishing. As his position of being a critic was challenged by extinction, he was faced with having to experiment his way forward and think what might be wrong with media that critique doesn’t work?

The dead end of critiques?

A funded experiment, an online book fair where online users get to publish, amateurization of critique, and the last mass mail at the Supermarket art fair (2018) where a critical journal written by the visitors is printed on spot, are projects that call for further thinking about how to be in the context?

The context in this case, can be further defined as not a place, but physicality which has locality…In other words: How to expand public/private spheres?

What does it mean to be of a place?