Remix of a blog by Florian Cramer and debris of tweets and photos, complemented with a dispersed editors' note.

The evening #synchronicityofparasites is organized by Marc van Elburg of the Zinedepo in Motel Spatie, Arnhem. Working with theories on the parasite as a metaphor for media culture, Marc found himself in a hotel in Ljubljana one day right next to an art space called P.A.R.A.S.I.T.E. which he did not previously know of. This coincidence can be explained by the inherent synchronicity of parasites, which is probably also why we planned our publishing conference on the exact same day as Marc’s event.

Motel Spatie is a DIY space founded in 2010 on the principles and with the attitude of squatter culture. Housed in Motel Spatie is the Zinedepo, a collection and public library of more than 1,200 international zines (i.e. small-edition, inexpensive DIY periodicals), founded and maintained by Marc van Elburg. 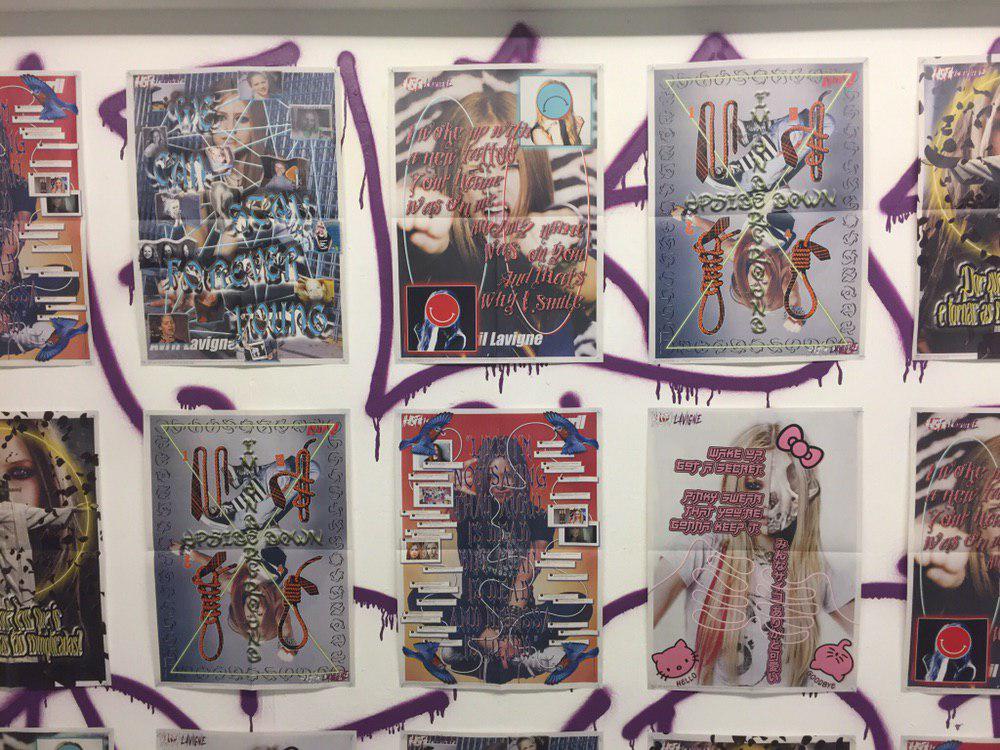 Van Elburg has been a zine maker and zine collector since the early 1990s. He is also an experimenter with generative/rule-based zine making, and a zine theoretician. His Zinedepo manifesto of radical zine culture clarifies Zinedepo’s overall understanding of zine culture in between (a) 1980s/1990s zinemaking as anti-mainstream, countercultural publishing and (b) today’s zinemaking renaissance where zine culture positions itself as an alternative to the internet (particularly, to blogging and social media), often emphasizing the handmade, visual, and material qualities of its medium. Here, the Zinedepo manifesto sees the danger of fetishizing and over-designing:

In researching radical zine culture, Van Elburg became interested in the notion of the parasite and parasitic publishing. In his book The Parasite (originally published in 1980), philosopher Michel Serres suggests rethinking the relations between humans and parasites: "We parasite each other and live amidst parasites. Which is more or less a way of saying that they constitute our environment."

For Van Elburg, the concept of the parasite is thus opposed to the ideology of autonomy and freedom as it is nowadays promoted by right-wing populists, because from a parasitic perspective, we are never free but live in complex systemic dependencies. The interrelation between parasite and body is so deep that separation would be deadly. The negative connotation of the ‘parasite’ thus needs to be turned around and ‘parasites’ need to be thought of as positive forces.

In this spirit, the Urgent Publishing symposium parasitically dwelt on Motel Spatie’s and Zinedepo’s symposium, the Synchronicity of Parasites. Coincidentally, this event was planned to take place at the same time as Urgent Publishing, and the two joined forces.

Dispersed editor’s note: The notion of parasitic publishing has taken hold in many ways, both conceptually and concretely. Conceptually, the stress on the interdependencies of host and parasite can be transferred to a renewed relationship between publisher and reader, moreover: between publisher, writer, editor, reader, and book, bookshop, platform, etc. Another lesson learned deals with the accepting the evolution of publication into new forms, allowing them to flourish beyond your control. Parasitic publications need each other to come into being and can start to thrive on one another when allowed the space to do so. The afterlife might just become a new start.

On the Emergence of Humanist Parasite Studies

Anders M. Gullestad is associate professor at the Department of Linguistic, Literary, and Aesthetic Studies at University of Bergen, Norway.

Gullestad introduces parasite studies as something that became his own endeavor and academic specialization through his PhD thesis. There are a number of negative, often political attributions of ‘parasite’. For example, both capitalists and socialists have been called parasites by their respective enemies. The literal meaning of the word, however, is someone who sits at a dinner table next to the regular guests and eats the food. Gullestad focused on Herman Melville’s Bartleby and his "I would prefer not to", and its adoption as a political slogan for Occupy Wall Street in 2011. Bartleby has been interpreted as a corpse or ghost, as a slacker, schizophrenic, the narrator’s double, a symbol of artists under marketplace conditions, as the patron saint of writers who stopped writing, as an exploited proletarian or even as a revolutionary. And as a parasite. 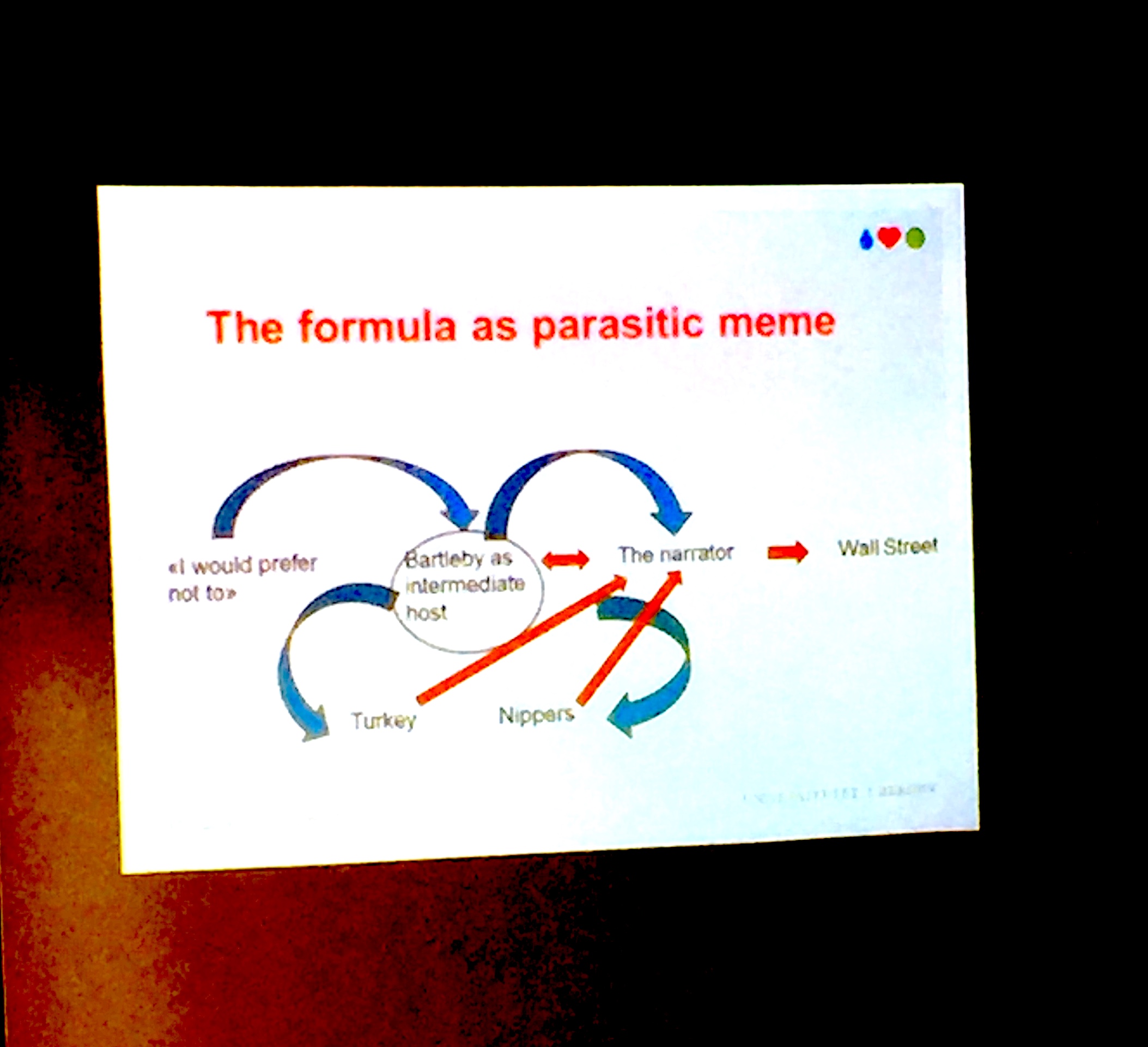 While there are several scholarly readings of Bartleby as a parasite, he actually does not feed on anyone or anything. So maybe the narrator himself is the parasite, feeding on Bartleby, and resulting in a symbiosis of parasite and host? Alternatively, the formula "I would prefer not to" could be seen as a parasitic meme, spread via Bartleby, with what Gullestad calls the ‘Bartleby [interpretation] industry’ being its performative proof.

The scholarship on the subject of parasites exploded after 2000. Gullestad therefore imagines Humanist Parasite Studies as a new field of research spanning literary studies, philosophy, sociology, anthropology, film studies, media studies, cultural studies, art history, linguistics, theology, classics, and more. However, this comes with a number of issues and challenges:

Since parasites are always with us and cannot be avoided, they are not a matter of good or bad. They disturb and upset control and therefore disturb hierarchies.

The Synchronicity of Feminist Parasites

Anna Poletti is associate professor of English Language and Culture at Universiteit Utrecht.

Poletti introduced herself as a literary scholar who does not study what is canonically recognized as literature, but marginal publications such as zines. Poletti relocated to the Netherlands from Australia where she had been involved with one of the world’s longest-running and (within international zine communities) most famous zine spaces, Sticky Institute, which is located in a pedestrian underpass in Melbourne’s city center. Prior to her talk at Motel Spatie, she had published her manuscript as a zine and distributed it among the visitors who were invited to read along her lecture. 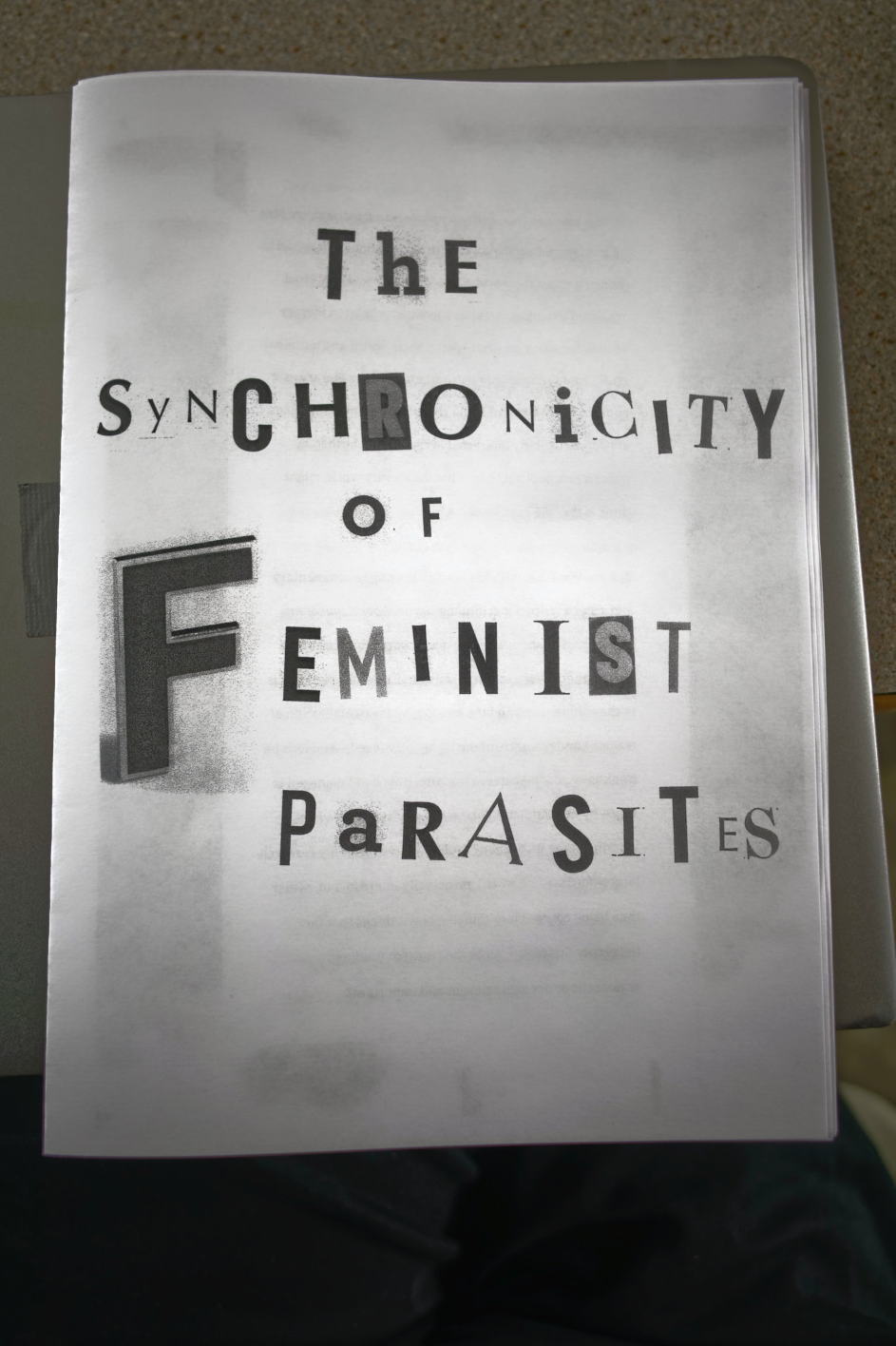 The lecture focused on three now-canonical woman writers: Virginia Woolf, Audre Lorde and Chris Kraus. Riffing on Gayatri Chakravorty Spivak’s question "Can the subaltern speak?", Poletti asks: "Can the parasite write?" She suggests to look at "femininity as a parasitic position that must be thought in relation to its host."

Poletti’s lecture sparks a lively debate with the audience. One question concerns the ethics of Kraus’ novel (which contains intimate details published without consent). Another question concerns the master’s tool as being central to almost any countercultural and critical publishing strategy: The Xerox machine with which most zines are produced happens to be a master’s tool, the internet is a master’s tool as well. Lorde did not literally speak of tools, but of practices and patriarchy, calling upon a new way of scholarly thinking, instead of continuing old modes of discourse.

Wilfried Hou Je Bek gives an introduction into systems, organization and the theory of the ‘invisible hand’ of Adam Smith. He proposes to look at the parasitic through the lens of game theory. Adam Smith’s ‘invisible hand’ was a rather obscure concept within his work until it became singled out and highlighted by the 20th century neoliberal ‘Austrian economists’ who advocated an uninterrupted free market without outside (i.e. state) interference. 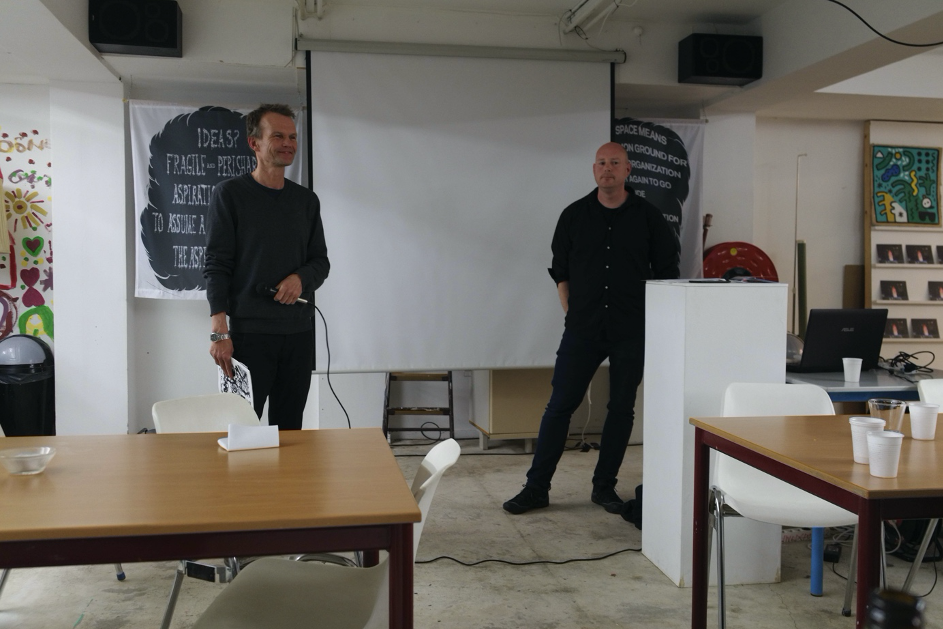 The equilibrium theory of the invisible hand seems to leave no room for parasitic actors. This also includes the game theory of the Nobel Prize-winning economist John Forbes Nash Jr. Margaret Thatcher’s famous quote that ‘there’s no such thing as society’ is derived from it: there is no society, only egoistic actors. This theory solves the free-rider problem through making everyone a parasite.

To put these observations into practice, Hou Je Bek programmed a small multiplayer browser game called Parasite Game. In this economic simulation, players can choose to be either contributors or parasites. Parasites will always win more money than contributors, but the game ends when everyone acts as a parasite. Wins accumulate so that in the end, wealth will be unevenly distributed. There are two ways of being parasitic: out of strength or out of hopelessness. If everyone contributes, the game ends after 40 rounds; with a certain but limited number of parasites, the game will last longer. This is an empirical proof of the parasite being beneficial to the system as a whole. 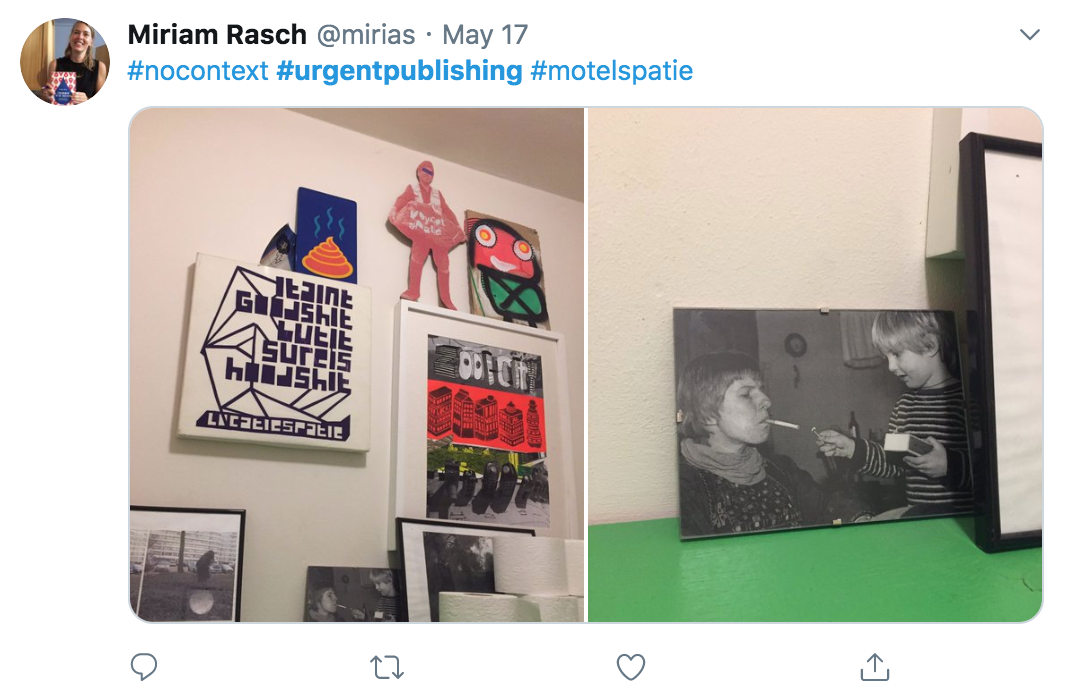