Minsk. We are late for our "labour inspection" in one of the biggest IT companies in Belarus.
Trying to catch a taxi.

"To Wargaming? For the first time? I go there every day. Near the subway there is a honey hole. Just drove up and again someone goes there... Tell me, becoming a programmer at 40 is probably hopeless, right? In general, are there 40 years old programmers? Or are they all becoming startuppers at 33?" he says while we are forcing our way through traffic jams.

"In general, I think that Belarus is a country of people who would like to become programmers. As one friend of mine says 'We are all programmers Wannabe'," he laughs.

20% of Belarus’ GDP derives from IT companies. The remaining universities of the USSR were gradually redesigned to produce programmers, system engineers, testers, database architects.

I'm sitting in a tank. The tank is in the lobby of a 16-floor business center. I am smiling: the tank is small, my head is ridiculously sticking out from the tank. While I am photographed, I think about our "labour inspection" and what it can give us. How can we know if the dreams of those who works here come true, the dreams of all who keep "the world of tanks" afloat.
While going upstairs with the elevator, we tell a tour guide that we have a week of Work Hard! Play Hard!, during which we rest and work, we dive into the transformations in the structure of labour, we experience degrees of immaterial and material labour within various artistic and research regimes. And now we are up. It turns out that there is an entire floor dedicated to rest in Wargaming.

"Programmers wannabe," the phrase is spinning in my head.

"Are you an indispensable employee?" I ask. 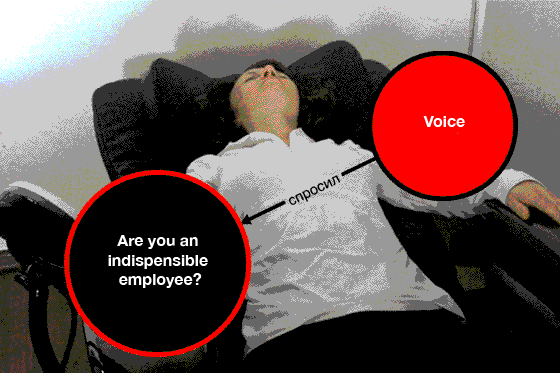 "Nope, come on, they will fire you without even thinking about it and even not think of you, if something goes in a way they don’t like. But it's nice to think that you are the one, of course,” says Employee #2. "Have you ever thought of your own startup?"

"Yes, I have actually tried. But my business partner got rid of me after half a year of working together. He used me to mull things over and then hired a team of developers from eastern Ukraine instead of me. He's a manager, I'm a techie. He later said in an interview that techies represent no more than 10% of the project cost," said Employee #2.

Proceeding through the massage chairs, the simulators, looking into the wood-trimmed saunas and indistinguishable kitchens on each floor with the same cookies at the very exact place, we search for the voices of the proletariat of the digital age, those who can be easily replaced, the name badges of which can be thrown away and forgotten. The underwater world of computer industry.

"A bot-lawyer? Never heard of it. Who made it? Google?"

"Why Google? Only they can make something like that?"

"No, it was made by a lawyer from London. Several years ago, control over the parking lots in London was completely automatized, from fixing contraventions to issuing receipts for fines. The lawyer began to unpack this issue. It turned out that the automatic system wrote out a lot of unfair fines. The guy programmed a small chat where you communicate with a bot, tell the details of your unsuccessful parking: where you were standing, e.g. on the lawn or not, what signs were around, etc If necessary, the bot asks for more details. In the end, it tells you whether you were right and whether it is worth to appeal. If so, you just press “send” and it does that for you. The bot has already won a lot of cases. So you can solve your problem in 30 seconds, having no competence of jurisprudence yourself. And there are a lot of users of this service just like you. Now the traffic police and the courts of London are filled with the cases of appeal. This system deflects the idea of big data. Automation is directed against automation."

"Have you ever programmed anything for a family?"

"Me? No," he paused. "But my father, back in the days when there was no Internet, created a program to calculate a family's budget. It was a gift to his wife for the wedding."