Remix of a blogpost by Inte Gloerich and a debris of notes and tweets, complemented with a dispersed editors' note. 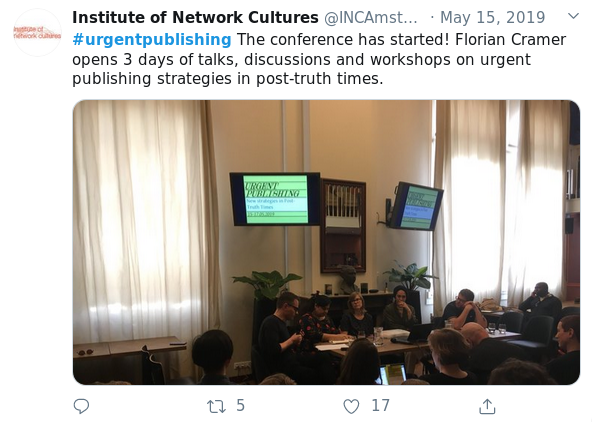 This panel served as an excellent kick-off to the conference: excited participants, urgent discussions, and a good overview of the topics to come. Moderator Florian Cramer framed the debate with a few opening words about what this 'post-truth' moment is that we find ourselves in. 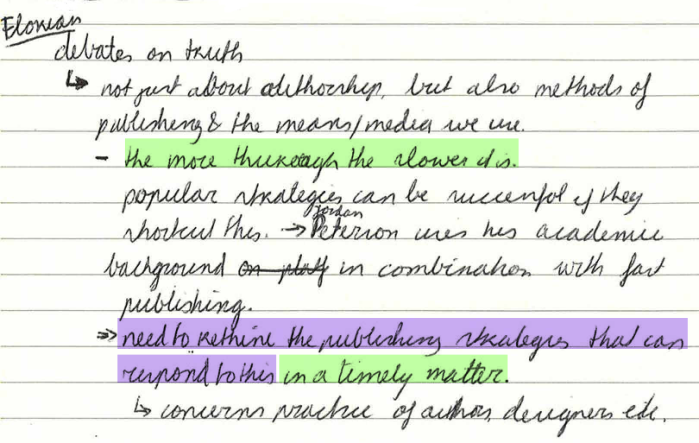 If traditional media are to be believed, social media are to blame for the current state of public debate. The refrain goes: people continue to drive circles in their own algorithmic filter bubbles, only seeing material that confirms their pre-existing worldview and subsequently polarization occurs. It seems to be a problem of information, truth, and authorship, an editorial problem, but in reality just as important are what we publish, how we publish, and which technologies we use.

Generally speaking, the more thorough a publication is, the more slow it is. This is something that populists take advantage of readily by short-circuiting social media speediness and academic slowness: while Jordan Peterson is trending on Twitter, surely the countering academic articles are in the making, but these refutations of Peterson’s take on Foucault or Derrida simply come too slowly to have any useful effect.

In this session we hear from practitioners that go beyond disciplinary boundaries to have a quick but thorough input for current debates.

Morten Paul is editor at the humanities publishing house August Verlag Berlin. He starts his talk with the statement that the notion of 'post-truth' is wrong to begin with. There is in fact a proliferation of truths, there are too many truths! While post-structuralism killed the truth, the right-wing has been allowed to flourish because of it. The problem with alternative facts is not so much the alternative, but the positivist understanding of 'facts'. This is too reminiscent of conspiracy theories: facts are truths that are out, but covered up. Alternative facts have been around for as long as we can remember. 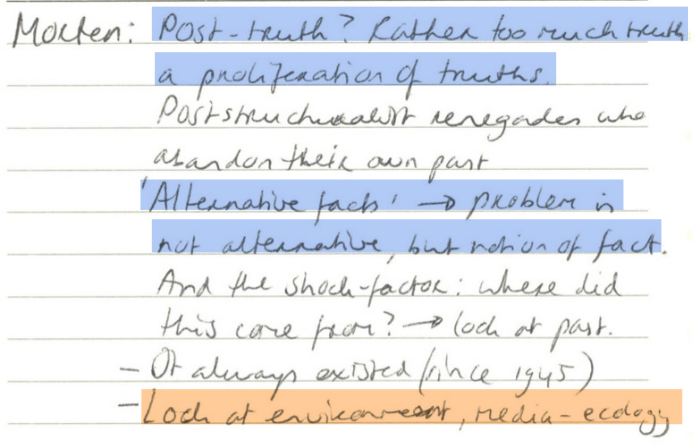 By historicizing these phenomena, Morten tries to go beyond the shock the left seems to be in right now. Having researched the history of far right magazines in Germany, he is able to discern that the strategies we see around us now have in fact always existed. Far right activism and the rise of right wing political parties historically go hand in hand, and are supported by a certain ideological cohesion on the right that the left lacks.

Nikola Richter (DE) is a writer, journalist, and publisher who combines comprehensive knowledge of the cultural and literary sector with an interest in online media and a broader perspective on political and social issues. In 2013 she founded the publisher mikrotext. 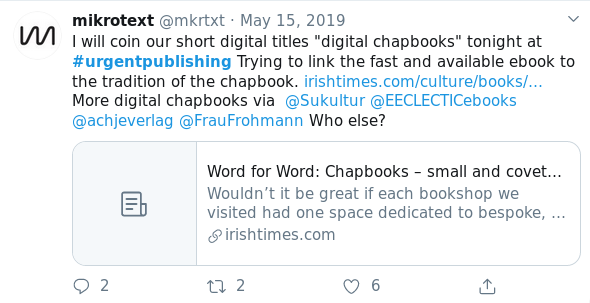 Nikola Richter is a writer, journalist, and publisher. She also draws historical parallels in her talk, although of a different nature. While we are talking about the speed of publishing in relation to social media virality, she says that the history of publishing was always also about speed. Think back to the 16th-18th century chapbooks: street literature that was cheaply produced and meant to spread popular cultures widely.

Today, a publisher’s role is expanding. No longer is it just about selecting, editing and presenting texts coherently, but a publisher now also needs to be a reader, a commentator, needs to engage on social media. 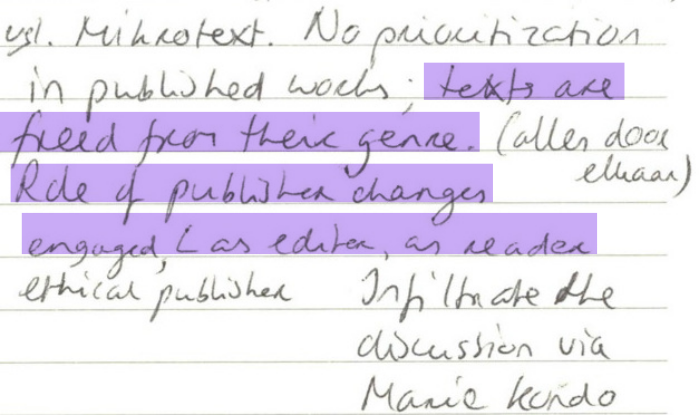 A publisher is not an outside entity acting upon public discourse, but actively located within it. An ethical publisher says "nichts tun ist keine lösung", and publishes for others, does it while thinking of others.

Publishers need to exploit their media to infiltrate discussions. Can the epub be a mobile chapbook? It can be read on any device, and one copy can instantly turn into endless copies.

Clara Balaguer explains her situation as being "in exile by academia". Originally from the Philippines, she decided to leave when the situation became untenable for her critical activities. She works by immersing herself in communities, on the ground in the Philippines, but similarly online as a troll (which you can read more about in the Memes as Means report).

Being invited to speak at a conference with the word 'urgent' in the title seems odd: since arriving in the Netherlands, Clara in fact has been feeling a general lack of urgency. Everything is neatly organized and orderly. In this privilege there is no real urgency like she knows it is experienced in the Philippines. 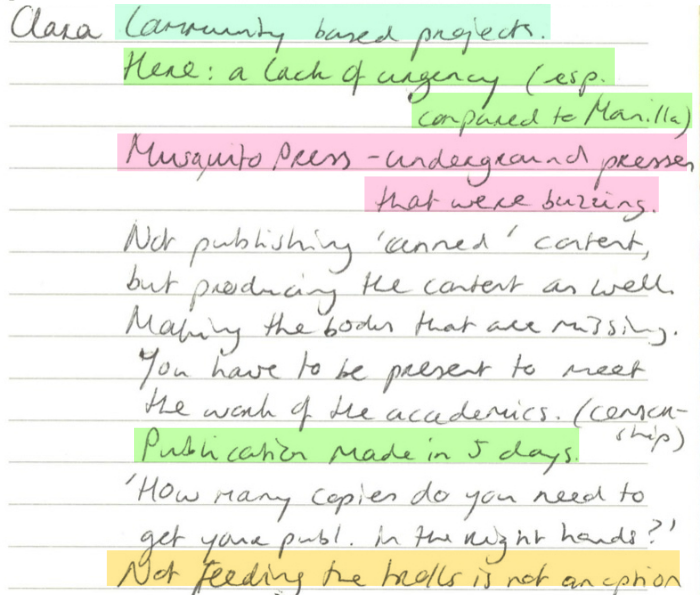 Clara co-founded Hardworking Goodlooking, an underground publisher, that wears the badge 'mosquito press' as a badge of honour. To be full of buzz and annoying under dictatorship, never able to be exterminated, is something to be applauded. Hardworking Goodlooking uses pirating strategies to distribute inaccessible academic work within the Philippines. This is not about big numbers: getting 25 copies into the right hands is in this case enough to have the right impact.

Padmini Ray Murray (IN) is a researcher and creator currently based in Bengaluru where she has founded a not-for-profit organization called Design Beku. She is visiting faculty at the Srishti Institute of Art, Design and Technology, where she launched India’s first-degree program in the digital humanities.

Padmini Ray Murray is a researcher and creator who is passionate about transforming ways in which we make and share knowledge. In her talk, she zooms in on the interrelation between power and knowledge, and relates this to the caste system in India and its influence on knowledge production.

The idea of the university campus as hotbeds for rape culture is not just an American phenomenon. The case of #LoSHA (List of Sexual Harassers in Academia) is an example of a kind of graffiti-inspired strategy of publishing that has a longer history in feminism. By publishing the list of harassers on Facebook, Raya Sarkar effectively created a graffiti wall consisting of names of the accused that was open for anyone to add to. It played a significant role in the start of the MeToo movement in India.

When "RAPE HAPPENS HERE" was projected onto the building of Columbia University during an open day in 2015, or when students at Brown University wrote the names of their harassers on toilet doors in the 90s, activists similarly inscribed a public place with their accusations, for all to see, for the public to deal with.

A ready critique of this type of 'calling-out' on social media, or finger-tip activism is that there is no due process. At the same time, social media activism is very ephemeral. Everything that is posted is at there at the mercy of the platforms and can be taken away easily.

Following Sara Ahmed, academics have to acknowledge their complicity in these power struggles. Academia never was the place of freedom. Cambridge University Press has always profited from colonial knowledge production in India. We now have to take social media practices as counteracts to those institutions and histories as well.

Dispersed editors' note: Publishing doesn't exist in a political void. It is, therefore, always an act of positioning. The examples brought by the speakers of the session speak to this: Clara Balaguer's 'mosquito press', Nikola Richter's chapbooks, Morten Paul's research into the history of the far right magazines, etc. As such, for what Nikola Richter calls "an ethical publisher", the question of speed is crucial, especially in politically unstable times where misinformation circulates faster and wider. What new responsibilities do publishers have in 'post-truth' times?

In the West, it is easy to be critical of the medium itself, forgetting about situations in other parts of the world where the benefits of connecting outweigh the downsides of the business. To deal with the post-truth, the answer should always be 'more discussion', never more authority.

Not everyone can do what Sara Ahmed did and leave the institution. Learning from Fred Moten and Stefano Harney we have to find the undercommons and make subversive use of the institution, and perhaps similarly the platform? 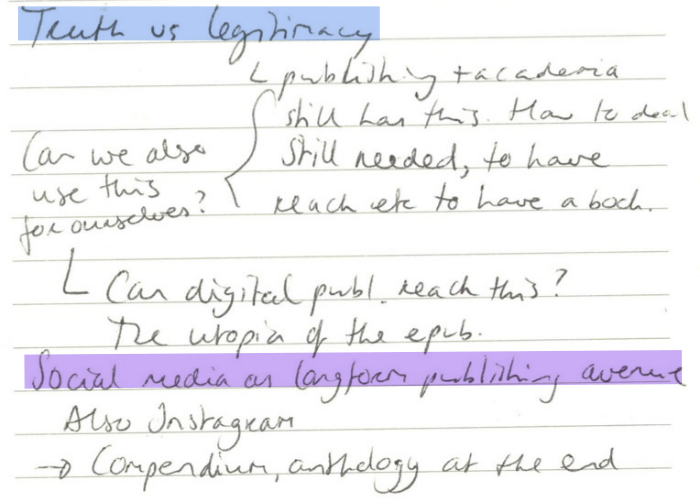 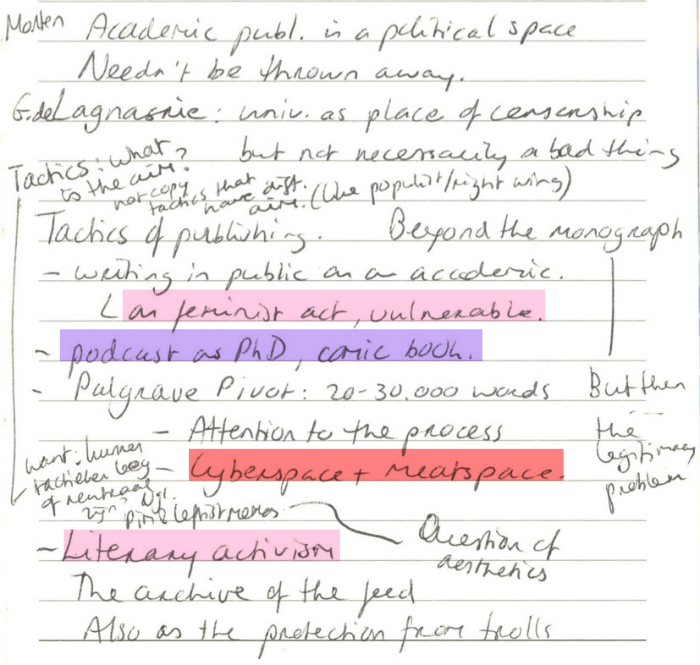