Remix of a blog by Sepp Eckenhaussen and debris of tweets, notes, and audio, complemented with a dispersed editors' note.

However trivial and frivolous the meme might seem, its function as a cultural and communicative object deserves investigation. The meme can bear witness to shifts in language and cultural norms. Memes can function as political agent: spread like a virus and change sentiment, become a talking point, or set an agenda. Are memes the ammunition of online culture wars? Have they contributed to the normalization of the alt-right? How to study these symbols and tropes, and how to create our own?

Using memes as a starting point, we look at online visual culture and how different popular communication styles have been incorporated into strategies of far-right movements. What are innovative ways to counter these movements on a transnational level? And how does the passing of Article 13 in the European Parliament affect our ability to freely express ourselves online? What does the meme have to say about positioning topical publications or research output? 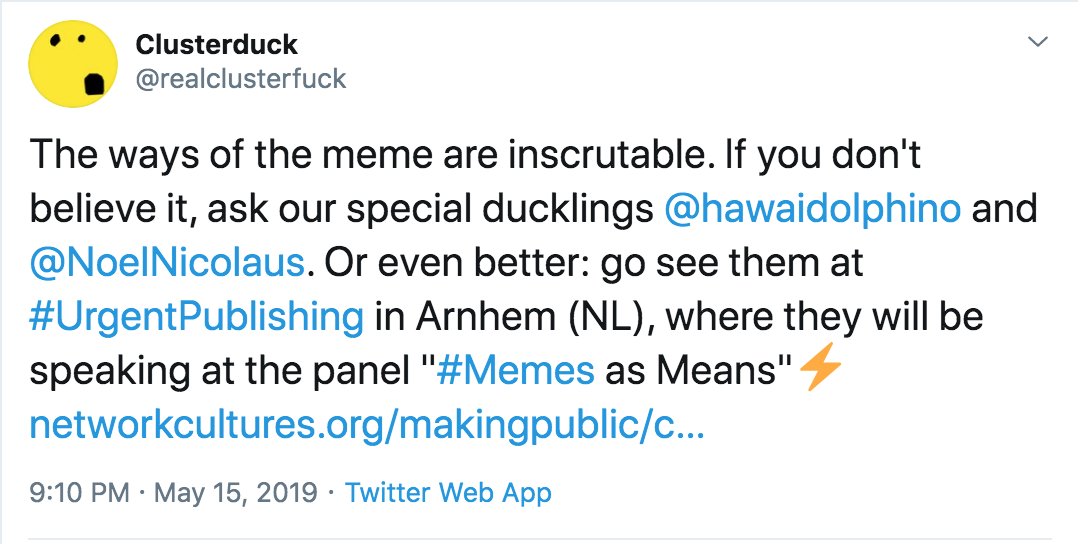 Meme culture can be situated and investigated within a history of online visual culture and the senses of community in it: selfie culture – video culture – meme culture. The notion of ‘means’ moreover addresses memes as having financial capacities, and as ‘means to an end’. What kind of activist strategies can memes as means inform today? Should we use them in every way we can, because ends justify means, or can we employ memes with laser point precision?

There are also questions of authorship and ownership. Crediting meme-makers becomes more widespread on the left flank of the political spectrum. What will be the relation between more severe copyrights and the anonymous army? Is there a chance of meme revenue models, of being paid for previously unpaid work? Is it time to unionize meme-work? Is meming a matter of being professional or of fighting a trench war?

The World Wide Web of Gatekeepers

Evelyn Austin (NL) works for Bits of Freedom, a leading European digital rights organization based in Amsterdam. She is also the co-founder of The Hmm, a network of contemporary visual culture enthusiasts.

Evelyn Austin, who works at Bits of Freedom and co-founded The Hmm, considers digital human rights such as freedom of publishing and distributing in the context of Article 13. The internet has always carried the promise to empower the powerless, and indeed it does empower. But as it usually goes, the internet also empowers the already powerful. 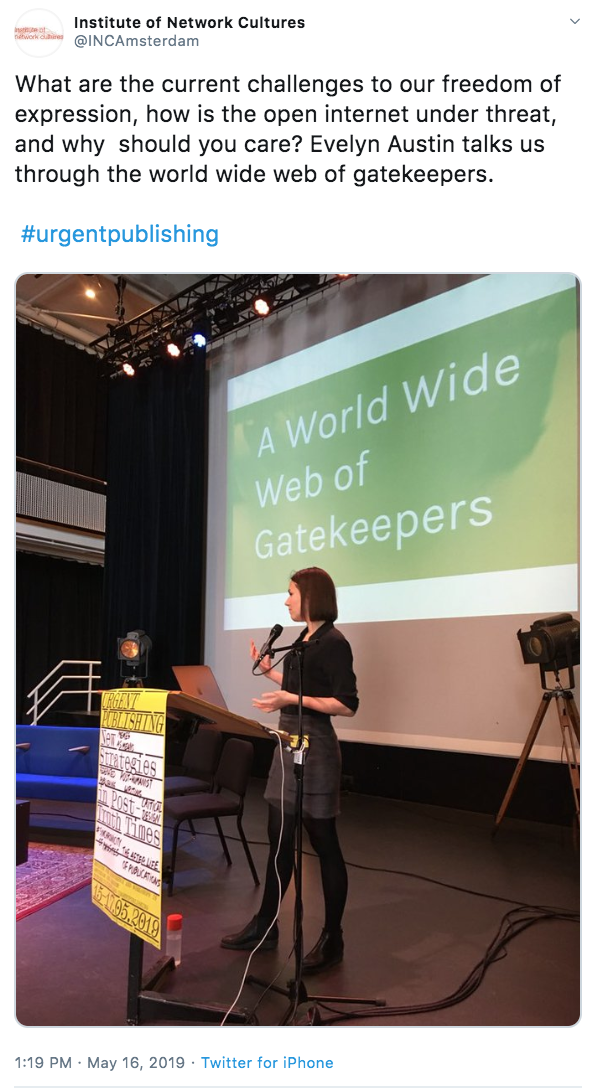 Many examples show the hampering of communication: Facebook took down pictures of Femen in Yemen on basis of nudity regulations; Dutch pro-choice organization WomenOnWaves were blocked in Ireland four times in the run-up of abortion referendum; YouTube videos with the word ‘trans’ in their titles are systematically categorized as ‘adult’.

This shows that there is a need for different modes of publishing and for alternative platforms, but also for new strategies of communication and distribution. We need good, strong, and wide networks of digital rights organizations and journalists. What we got is Article 13. The article (which in the end turned into Article 17) makes platforms and other ‘hosts’ accountable for what users are saying on their site. An individual’s speech on a company’s website is automatically the company’s speech. This is of course threatening to companies. There are two solutions:

Thus, we find ourselves in a complicated situation. Realistically, we’re stuck with the big platforms for now. This means there will be loads of frustration about filters of ‘possible’ terrorism, child abuse, nudity, etc. We have to remain critical and we do have the means to change things, as for example #gamergate has shown.

Cultural worker and avid troll Clara Balaguer has been occupied with online troll wars against the rise of authoritarianism in the Philippines for years. Two years ago, it became untenable to do critical cultural programming in the Philippines for under-served communities and Clara decided to come to the Netherlands. In the inevitable comparison of these two countries, it is clear that the levels of ‘urgency’ generally felt in the Netherlands are much lower than those in the Philippines. Reflecting her experiences as troll, Clara shared five aphorisms:

Isabel Löfgren (BR) is a Swedish-Brazilian artist, educator, and researcher based in Stockholm and Rio de Janeiro. She currently works as a Senior Lecturer in Media Studies at Södertörn University, Stockholm, Sweden. 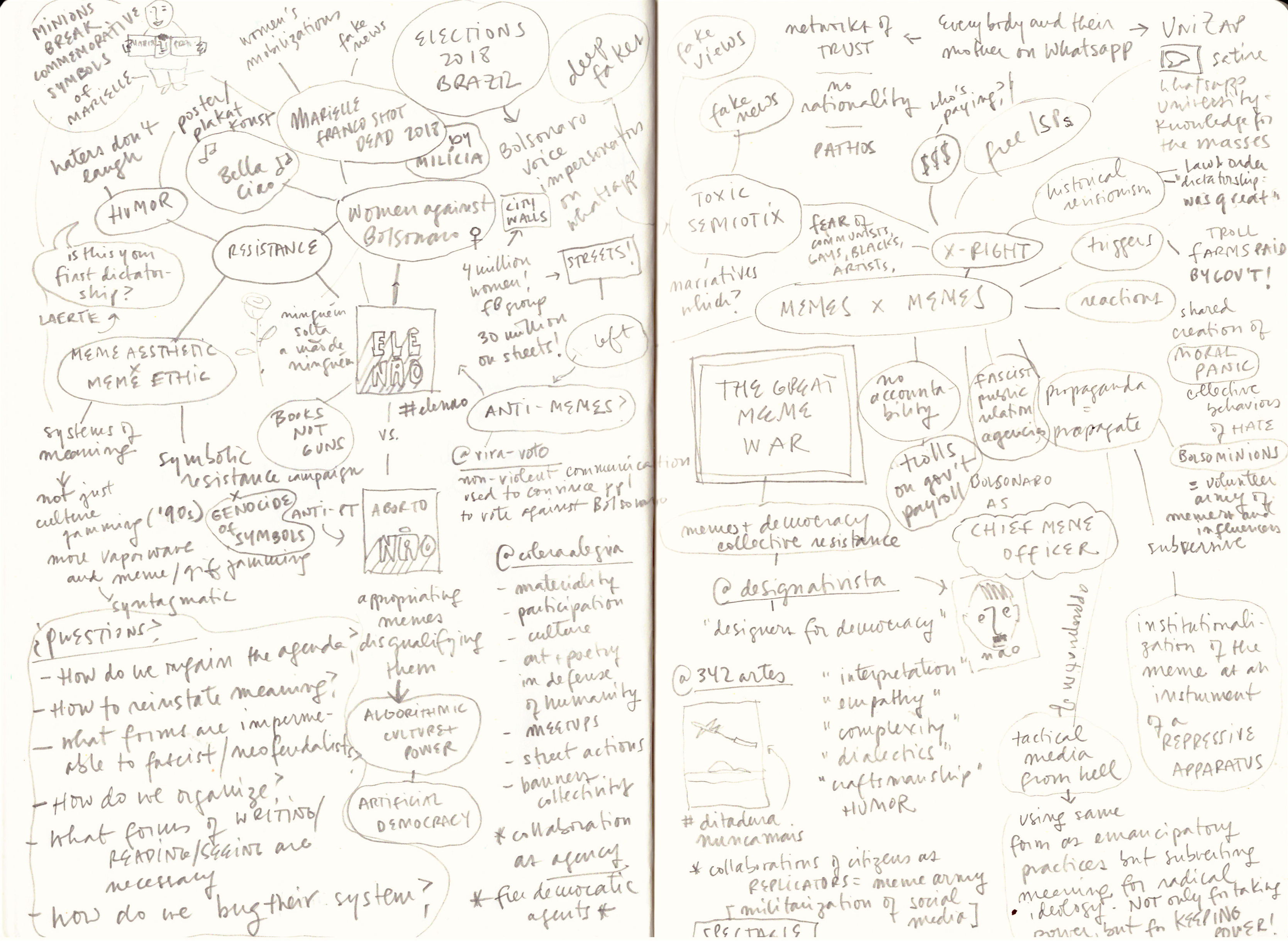 Isabel Löfgren, a Swedish-Brazilian artist and educator currently based in Stockholm, took up the theme of memefascism vs. autonomous zones of resistance in Brazil. The fact that memes are a serious means is very clear by the fact that Jair Bolsonaro has been elected president thanks mostly to ‘bolsominions’: an army of trolls campaigning for Bolsonaro through WhatsApp. Jair Bolsonaro has even claimed to be, next to president, the official controller of memes.

This situation also shows us something about the so-called post-truth condition. Studies show that half of the troll messages during the election campaign came from WhatsApp family groups. This signals that, first, it’s not about truth but about trust, and, second, that the crisis of authority in relation to truth effectively splits families and social structures as we know them. In the presidential palace, there is even an official social media farm. The most successful bloggers and vloggers from the campaign are hired to work for Bolsonaro’s official PR bureau. Together, they effectively create a bombardment of disinformation.

However, Bolsonaro’s disinformation and repression of minority voices is not unbreakable. When, during carnival, black, poor, and gay voices let themselves be heard on the streets, Bolsonaro started tweeting about golden showers, subsequently asking: What is a golden shower? He was met with cunning and humor, when Twitter and Facebook accounts named Golden Shower started asking: What is Jair Bolsonaro? 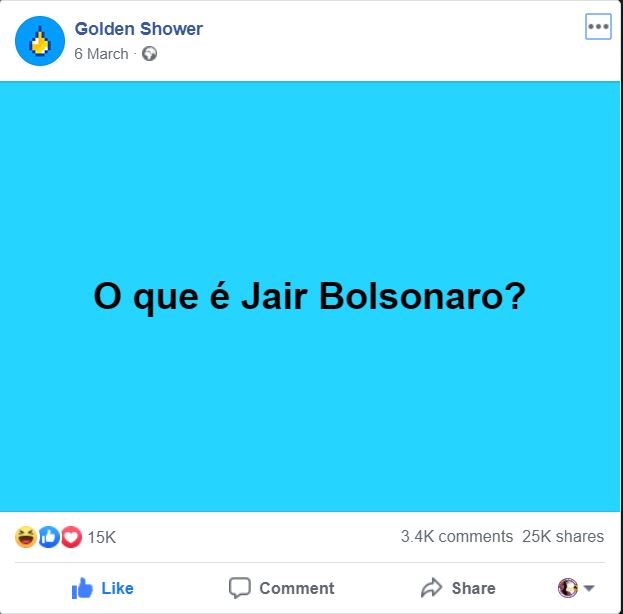 In fact, this type of humorous grass-roots mobilization is a consistent trend in Brazil. Already during the election campaign, women, black people, and other minorities repressed by Bolsonaro came together in the Not Him-campaign (#elenão), which was huge and powerful.

It is clear that the far-right kidnaps forms and thereby subverts democracy, but that counter-meming can be a powerful means of the Left, too. The questions that rise include: How to level out this battlefield of meme-wars? What is the role of poetic justice in memes? How can art collapse meaning and contribute to meming?

Dispersed editors' note: The gap between traditional research publishing and meme culture appears unbridgeable. Not only because the first may take years to produce a single publication, while the latter spawns offspring seemingly effortlessly, or because both relate in opposite ways to notions such as referencing, originality, and authorship. Memes thrive in a polarized environment that rewards the in-your-face punchline. Researchers value nuance and seriousness more than anything. This begs the question whether memes actually have potential outside of digital culture, even if they have shown to be an inherently political instrument over the past years. Moreover, don’t memes serve the (radical) right of the political spectrum best, tailoring to its desire for just such polarization? It surely isn’t a coincidence that right-wing presidents such as Bolsonaro or Trump associate themselves with meme-ification? This style of politics, as Isabel Löfgren says, loves binary oppositions. Aren’t memes inherently binary themselves? And what then, could ‘serious’ publishing learn from that? Some answers are given here: their humor of course, their use of language (so not only their visuality), the way they tell a story, the way they build trust and organise communities around them, and their commonality.

Noel David Nicolaus (DE) is an independent scholar and editor living and working in Berlin. He is currently working as an editor and is part of the Digital Art Collective Clusterduck, an interdisciplinary group working at the crossroads of research, design, and filmmaking.

Silvia dal Dosso (IT) is a creative in the digital field and researcher of internet trends and subcultures. She wrote and directed The 1 Up Fever (2013). With Clusterduck she created #MEMEPROPAGANDA, an interactive exhibition built to create active engagement and awareness about the process of memetic propaganda.

A last contribution to the panel was made by Silvia dal Dosso and Noel David Nicolaus, as representatives of Clusterduck, a hypergeeky online environment for the study, production, and exploration of memes. 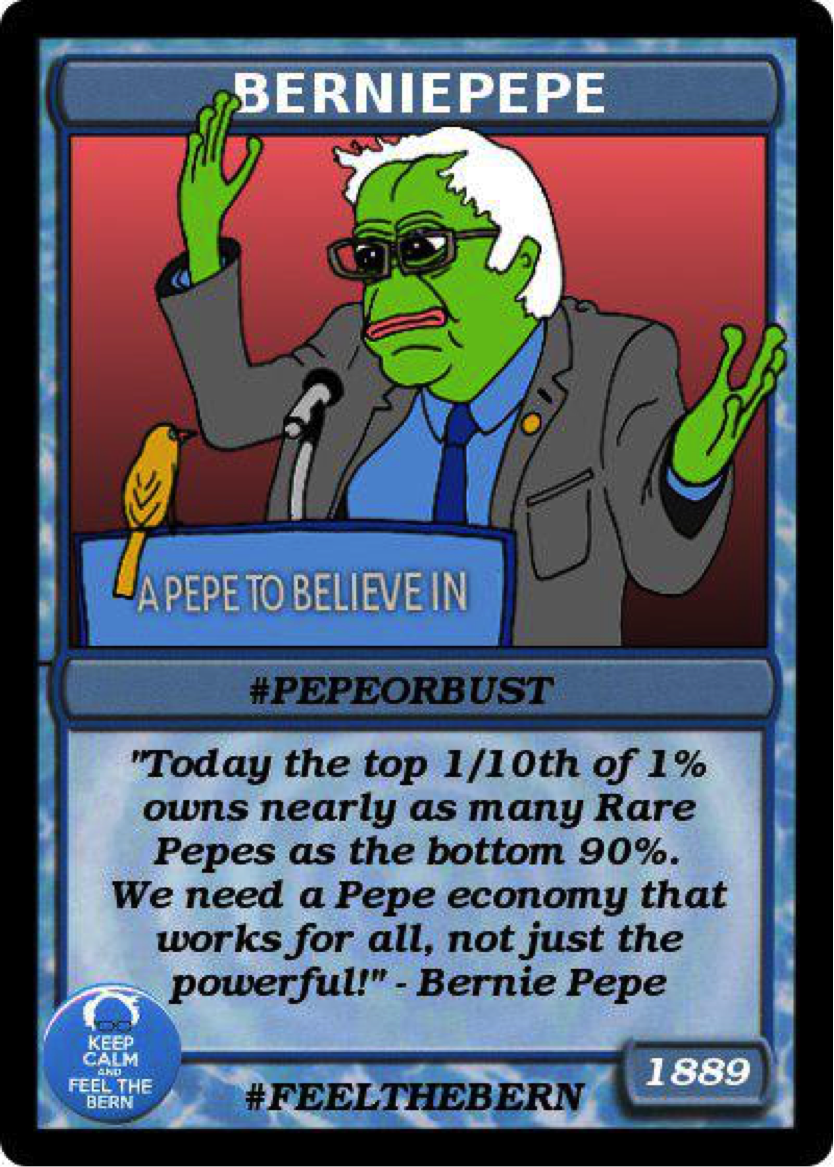 Memes cannot be consistently explained, as mainstream media often try to do. For example, the narrative of the American election running from alt-right sentiments living on social media, to Trump endorsing these memes, to Hillary falling into the troll trap, to Russian bots intervening in the campaign is as linear as it is inaccurate. Have we forgotten that there were also Berniepepes? To really understand memes, we have to go deeper into the actual images and see how they’re currently used as means.

The history of memes is a history of exodus, in which meme communities migrate from one medium to another. The most recent major example would be memelords changing to Instagram after Tumblr changed its terms of use.

Even though there seems to be some agency in this mobility of communities, it is a complicated issue. There is an on-going effort to make a memers’ union, to start protecting the authorial rights of meme-makers. The initiative went viral and was picked up on by the media. However, the union itself has not been very successful in terms of members.

Isabel Löfgren on how to organize and the role of communication.

How to co-opt meme activism? Noel David Nicolaus on the stories that we tell.

The discussion around memes as means comes down to one lesson, which is as powerful as it is simple: democracy is not a given. Fascism is a reality, which has to be faced. It is time for the Left to stop being disdainful to the means of memes, to co-opting, and to organization, because this why the Right is winning right now. The Right organizes, has money (which comes with being in power), doesn’t claim a moral high-ground, and is willing to accept pluralism. We should not give in to the instantism we’re being pushed into by dominant modes of knowledge-producers, but start taking back initiative, and: start to troll.