Remix of a blogpost by Silvio Lorusso and a debris of tweets, complemented with a dispersed editors' note and a post scriptum.

Florian Cramer and Roel Roscam Abbing talk about federated social networks, how they work, what they do, and what chances and pitfalls they present for the publishing domain. 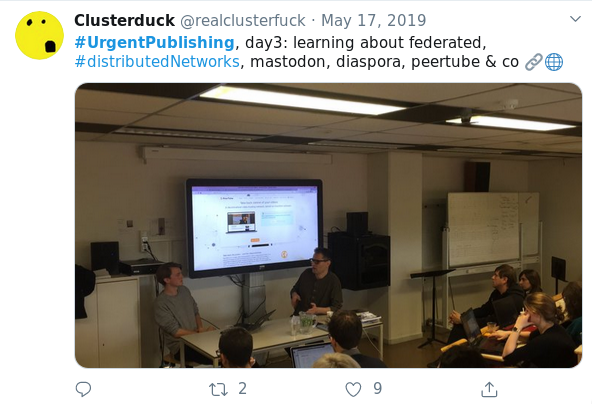 Roel Roscam Abbing is a researcher and artist who works on networks, infrastructures and the politics that inform them. He’s a founding member of varia, a space for developing collective approaches to everyday technology located in Charlois (Rotterdam). Varia hosts and employs a series of federated networks, such as one based on XMPP, an open standard for messaging.

Cramer and Roscam Abbing started by explaining what is a federated network and why it matters nowadays. Federation allows diverse entities to preserve some internal rules while still being able to communicate with each other. In this way they are able to maintain a certain degree of autonomy. Roscam Abbing pointed out that federation is not new, email and the web being old examples of it which are still in use. However, in a landscape characterized by an increasingly vicious centralization and by users’ growing awareness of their needs and the limitations of generalist platforms, federation acquires new meaning and relevance.

The subject of the conversation then became Mastodon, a Twitter-like federated social medium. Unlike Twitter, Mastodon is comprised of multiple community-owned "instances", that can define their own rules, modify user interface, etc. Mastodon itself is part of a bigger network called the Fediverse, which includes different applications (such as the older GNU Social or the recent PeerTube) that are able to communicate with each other thanks to underlying federation protocols such as ActivityPub or OStatus. 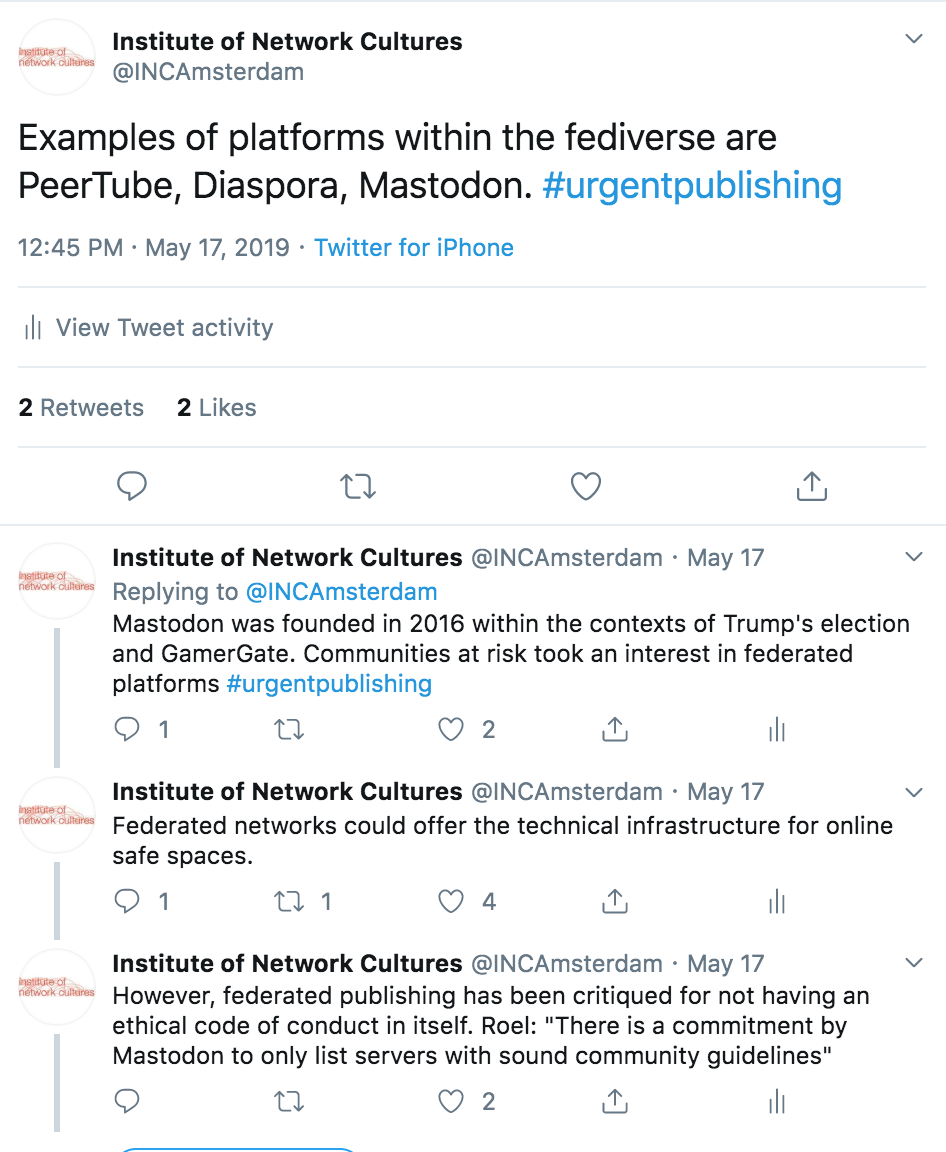 Roscam Abbing is one of the admins of a Mastodon instance called post.lurk.org and dedicated to media, free software and the politics of technology. Post.lurk.org currently hosts 129 users and is invite-only (you can get in touch with the admins on https://talk.lurk.org/). Roscam Abbing explained Mastodon stands in a too long tradition of projects that reimplement the features of proprietary applications but in free and open source software. Mastodon initially emerged as a fork of GNU Social and was driven by a dissatisfaction towards social media like Twitter. Particularly in the wake of silencing techniques and the harassment campaigns that went through the hashtag #gamergate and the election of Trump. The urgency was that of modifying the software stack and to build organizational techniques to create safe spaces for targeted communities.

In order to join Mastodon, a user needs to pick up an instance, which might be confusing at first given the sheer diversity among the existing ones. Picking one instances doesn’t mean you can’t communicate with other ones, however. They do however form their own distinct communities with rules and guidelines. Roscam Abbing highlighted the presence of code of conducts on many of these instances as well as shared customs, such as stating one’s pronouns in their bio. These codes of conducts are meant to communicate to potential visitors on what that community considers (un)acceptable behaviour.

In this respect, Cramer remarked that safe space doesn’t necessarily mean progressive or left-leaning, but it can also be a zone that purposefully breeds far-right sentiments and ideas. From this point of view, Mastodon can be seen as “the perfect technology for distributing a troll farm”. In fact federated social media share a common ground with the interests of a subset of 4chan users, in particularly the board /g/ where free software and alternatives to commercial media are often discussed and promoted. Similarly interest in these networks can also be linked to cyberlibertarianism.

There are several ways to preserve a sense of safety within an instance. For example, other servers can be silenced (users will still be able to get their content in their personal timeline) or fully blocked, in a process called 'defederating'. Roscam Abbing pointed out that defederating caused quite a stir among inhabitants of the fediverse, as it goes against the principle of openness and unlimited interconnection that are the hallmark of web and free software ideology. One way to motivate the implementation of silencing and blocking at the instance level can be summarized as "we don’t have to read your bullshit".

"If silencing and blocking is possible, isn’t there the risk of creating the equivalent of an organic supermarket, of elitism, of leaving the territory unguarded?", asked Florian Cramer, suggesting that it is important to "stay with the trouble". Roel’s response was that federated networks and proprietary platforms are not mutually exclusive. However, the safe spaces provided by a specific instance allow to strategize and to produce a different techno-social imagination.

The issue of privacy was also raised by Cramer, who spoke of synchronization while being reminded of bbs. Roscam Abbing clarified that privacy on Mastodon shouldn’t be understood in the classical sense of a private communication channel as it doesn’t implement any end-to-end encryption. This is because Mastodon has been conceptualized as a publishing platform where most messages are publicly readable. This makes Cambridge Analyitica-style mining still possible. It also means that direct messages can be potentially read by admins, just like on the major commercial platforms.

Cramer and Abbing discussed the "composition" of the people involved in a project like Mastodon: not necessarily male engineers rooted in computer science but often designers and media people with a particular attention to user interface (Mastodon looks much better than the average free software project) as well as communities typically underrepresented in free software development such as people of color, queer, etc.

Dispersed editors' note: Commercial micropublishing platforms such as Twitter and other corporate social networking platforms may offer the speed required by the notion of urgent publishing. However, they are rife with misinformation, troll attacks, cyberbullying, etc. As highlighted by Roscam Abbing, the development of Mastodon was driven by the dissatisfaction of historically marginalized communities, often the target of such attacks, with these (and other) aspects of commercial platforms. The federated social web tries to experiment with radically different ways of conceiving digital sociality, supported by a decentralized technical infrastructure. The focus on communities, codes of conduct and moderation present in many of the instances and projects of the Fediverse attests to this. In this sense, besides speaking to the notions of 'speed' and 'post-truth', federated publishing connects with other overarching themes of the conference, namely 'community' and 'locality'. However, as Florian Cramer pointed out, the federated social web is not an inherently emancipatory project, as the existence of alt-right Mastodon instance Gab proves. Nonetheless, for all the reasons listed above, federated publishing deserves to be developed further as a possible answer to the challenges of publishing in post-truth times.

The questions from the audience revolved around the notion of governance. Roscam Abbing responded that the development of the project is currently based on the "benevolent dictator" model, as the creator of Mastodon has the power to take final decisions (in fact there have been Mastodon fork-tryouts, where the main focus has been a different form of governance). Furthermore, not all labour that goes in the project is acknowledged: work that is not code is often rendered invisible. This has lead to disenfranchisement from queer and POC communities that in the early stages contributed a lot to the platform. One of the most interesting spaces to understand where Mastodon is going is the issue tracker: this is where plenty of users, not necessarily developers, request, discuss, and criticize features.

P.S.: After Roel Roscam Abbing and Florian Cramer's presentation, students from the Experimental Publishing Masters @ Piet Zwart Institute (Rotterdam) presented their publication The Networks We de(Served). The publication features the students' personal accounts on setting up their own homebrewed network: "While self-hosting together we questioned our understandings of networks, autonomy, online publishing and social infrastructures, where each of us departed from a different question." 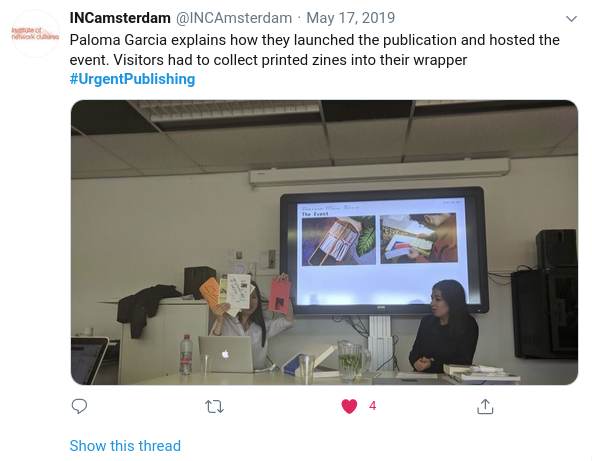