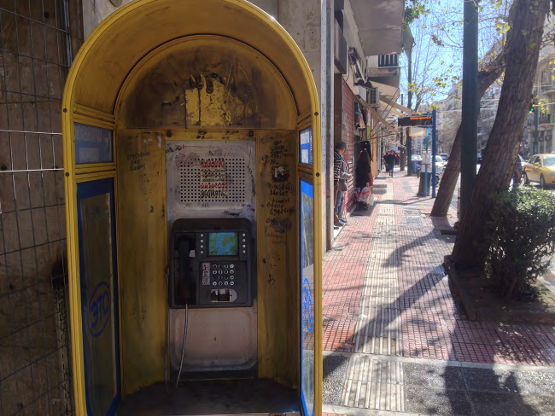 A phone−booth in Athens, Greece. The phone doesn’t work, the line is dead. The standing booth bares traces of other communications.

Let’s attempt a reading in accordance with local scripture, from left to right, top to bottom. But where to start? What is legible? What is deleted? What was never intended as a message?

Top left: a clear start. Handwritten with green felt marker: A cell−phone number (they all start with 69 in Greece), the word GAY in capitals, and under fuckmy (italics mine).

A bit to the right, on the silver panel: a smudge ending with the numbers 001. Handwritten with black marker.

Following the black line towards the centre: The word NTINOS (a name, short for Konstantinos) partially erased. Below it, written by the same hand, partially erased by another: a number starting with 69 becomes an indecipherable smudge. Then a barely legible word: Masaz.

Following the black line downwards to the number starting with 694060[smudge]1.

Directly below it, with a marker of the same colour and similar fuzziness to the smudge above, the numbers 6981. And next to it, by a finer marker and hand, a complete 10−digit cellphone number: 6981719528

We can now recognise the same sentence written below, even though, it’s partially covered by a partially removed sticker. And once again under it, this time obscured by a thick black smudge.

Is that the same marker that writes the next number below? 6946081991. Some numbers appear to be extended by another hand, with another marker. Below, the word Masaz, followed by the name Manos, clearly by the same writing hand.

Below, the number 69406. Interrupted? Once more, directly under, 064060[smudge]. Again interrupted? By another hand, at another moment in time. Finally, written over an area of the panel where the yellow paint has flaked off leaving a bare metal surface, the number complete: 6940601001 An arrow links it to its author’s (?) name and service: Manos, Masaz.

The partially removed sticker in the centre reads (translation from Greek): KOKA KOLA √ produced in Bulgaria √ consumed in Greece √ taxed in Switzerland. Take part in the boycott.

Below the remains of the sticker, still on the silver panel, handwritten with black marker, both erased and smudged over by other black markers, barely decipherable numbers and text ending in the name NTINOS. 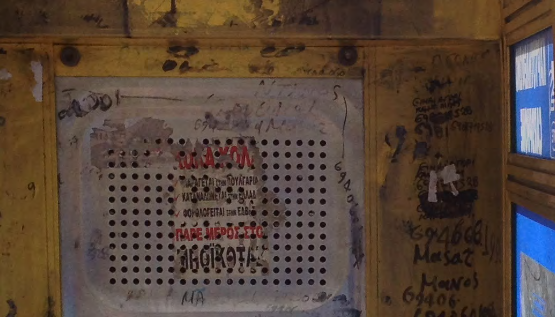 Ntinos has apparently not been around recently.

And while we’re at the phone, let’s look at another group of dubiously deliberate smudges: the dial buttons. But only the ones that feature(d) numbers. Except of the number 4...

4, the number of rows and columns on the dial panel.

Perhaps we can now attempt a reading of the smudges. Are they signs or traces? Signal and noise. Canvas priming and final touches.

TYPES OF SMUDGES AND OTHER FUDGES

Type 1: There have been attempts to clean the booths. These have produced the large vague areas of faded black ink. These cover more or less the entire background on some booths.

Type 2: These are smaller, more contained areas of blurred and partially removed ink. They suggest more targeted attempts to erase certain writings. These may have been the result of a half−hearted cleaner or someone who was content with rendering (some) messages unreadable.

Type 3: These are distinct dark spots made with markers. They render messages unreadable by obscuring them. Their size corresponds to the area that they need to cover in order to obscure their target. In some cases, smudging over just a couple of numbers does the job. Smudges of this type are highly targeted and clearly deliberate. Their intention is not to clean booths but to dominate communications.

So far we distinguish two main categories: erasures and cover−ups. Two approaches, respectively, the subtractive and the additive. There is also a third approach: distortion.

Type 4: These are not smudges but graphic elements added to existing writings, like extensions, to distort their meaning. For example, the number 0, with a little line added becomes a 6, or a 1 becomes a 7, thus distorting the original phone number and producing a new one. Another example: ΧΡΗΣΗ ΑΥΓΗ (golden dawn) becomes ΧΡΗΣΑ ΑΥΓΑ (golden eggs).

In their freshly assigned role, the phone−booths re−enter the city’s communication channels. They quote, from URLs of conspiracy theory videos to tags by local hooligans, all mingling with signs indecipherable (for most readers), with scrawls and smudges, and private messages, from romantic confessions to sexual services offered with names and mobile phone numbers. 69 is the prefix for commercial mobile networks in Greece which all work with real name bound accounts.

To get a closer look at these flows of messages, we documented phone−booths in various parts of the city. The result is a series of over 800 photographs, which, by their sheer number, asked for some structure to be accessible. Using keywords, we arranged them by categories, into galleries at geolocations on openstreetmaps. We have come to regard most of the ones of sexual nature as advertisements for the simple reason of the frequency of their re−occurrence and frequency of updates allover the city. A frequency that even a most frantic wrath would fall short of to write, if the motivation was of a personal nature

Let’s pause for the dilemma of motivations here: Are they indeed advertisements or are they meant to be outing people with their names and numbers, in a form of hate speech?

Since the numbers are mostly coupled to male names, we looked at legal aspects of male prostitution. There are contradictions concerning male sexwork in Greek law which make the legality of male sexwork unclear. This may very well contribute to the reasons for this thread of handwritten phenomena, next to the difficult to imagine levels of poverty and exposedness.1 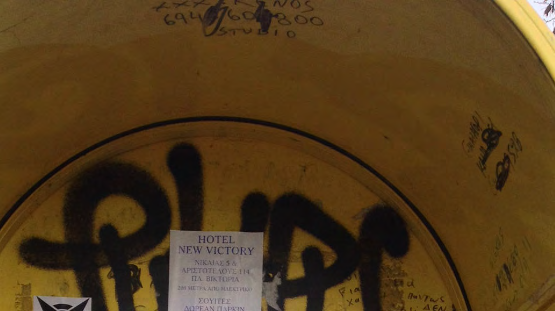 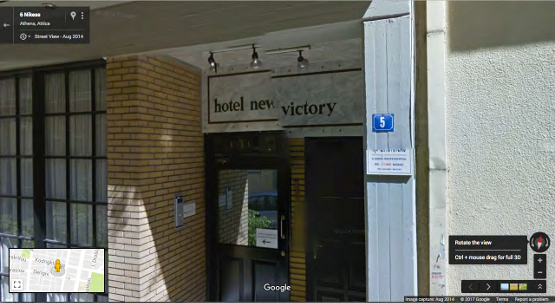 69.numbers.suck presents the documentation and our findings as offline maps. To protect the writers and their characters as best as we could we do not expose it online as a Google map gallery and we took the following steps.

Step one:
We present the 69 database only offline to lessen exposure to data mining or the scope of doxing. We serve 69.numbers.suck, locally, from an encrypted and modified wifi router that is toned down in range to limit wifi reception to the exhibition area.

Step two:
To have a recourse to the rule of law, even if weak, we copyrighted the database and the images to discourage unwanted reuse. The landing page also asks all visitors to observe the issue.

The request reads: “69.numbers.suck” is presented as an offline collection to keep a measure of protection from data crunchers. BrowserBased Group kindly requests you to refrain from reproducing and putting online any of this material! Further, the image files, the database and the resulting tracks are there for the sole purpose of consideration. Any data extraction, disclosure, dissemination or copying of content is prohibited without the authors’ prior consent!

69.numbers.suck is a subjective overview and in no way is it all encompassing. 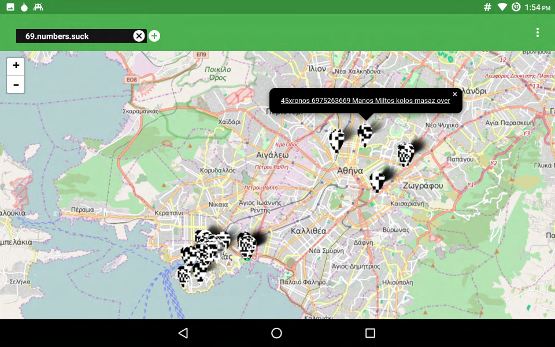